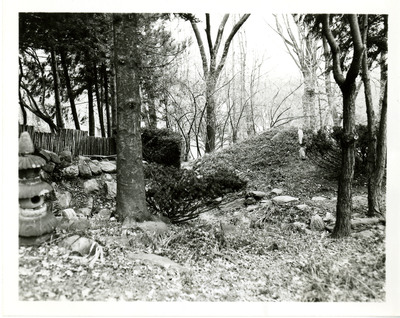 Not certain, but most likely Rev. Anthony J. Eiardi, S.J., based on the fact that he sent these photographs in 1956 in his letters to Arthur Shurcliff

This is a replica of Mount Fujiyama, part of the Japanese Garden at Bellarmine Hall, designed in 1926 by Arthur A. Shurtleff (aka Shurcliff) for the Walter B. Lashar family. It featured a chimney 1 1/2 feet in diameter which would belch smoke like a real volcano. Small rocks were placed along the base of the structure to stabilize it. The real Mount Fujiyama in Japan is approximately 12,290 feet above sea level and is revered as a sacred mountain.

In May and June of 1956, Rev. Anthony J. Eiardi, S.J. sent letters to landscape architect Arthur Shurcliff asking for his recollections regarding the Japanese Gardens he designed 30 years earlier for the Lashar residence. Eiardi apparently did not send any pictures of Mount Fuji in his first letters, which prompted Shurcliff to ask in his letter of November 1st, 1956 to Eiardi, ‚ÄùRegarding the volcano, I wonder if it still exists. It had a flue running through the center so that a small fire, especially of damp material, would issue smoke, as sometimes happened with Fuji. The bare rocks on the top were symbolized by similar small pieces of native stone. The upland vegetation near the summit was indicated by Stonecrops. Of all the parts of the garden I suppose this Fuji must have been the most perishing because of its exceeding small scale and perhaps the danger of fire creeping from the little fire box beneath.‚Äù Eiardi must have replied with a letter and more photographs. On December 24‚Äùth 1956, Shurcliff wrote back to Eiardi: "Thank you for the photographs you enclose, which reassure me that Fuji is still holding its own‚ I am delighted that Fuji merited the exclamation of the student who has seen the original." Image date is approximate.

Not certain, but most likely Rev. Anthony J. Eiardi, S.J., based on the fact that he sent these photographs in 1956 in his letters to Arthur Shurcliff. "Japanese Garden looking south-southwest toward the garden's replica of Mount Fujiyama." 1956. Image Archive. Fairfield University Archives and Special Collections. https://digitalcommons.fairfield.edu/image-archive/127.