Man with glasses standing at the Alumni Hall construction site 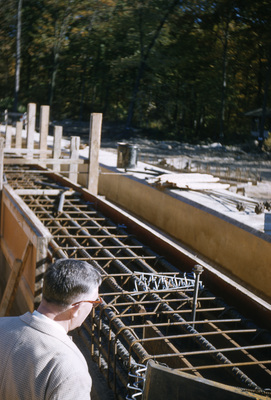 This photograph shows a man in glasses watching the beginning stages of the construction of Alumni Hall. According to the photographer, ‚Äúthe construction started with footings and foundations - then the floor was poured. The arches were poured in forms on the floor. If I remember correctly, three arches were formed on top of each other with a non-stick coating between. The arches were lifted in place and bracing was introduced. Once the roofing was applied, the forms were built to pour the seating deck. A wall was built to separate the building into two gyms.‚Äù