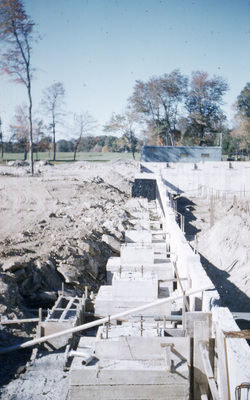 This photograph shows the foundation wall and construction site of Alumni Hall looking north. Loyola Hall is on the left beyond the range of the camera. According to the photographer, ‚Äúthe construction started with footings and foundations - then the floor was poured. The arches were poured in forms on the floor. If I remember correctly, three arches were formed on top of each other with a non-stick coating between. The arches were lifted in place and bracing was introduced. Once the roofing was applied, the forms were built to pour the seating deck. A wall was built to separate the building into two gyms.‚Äù