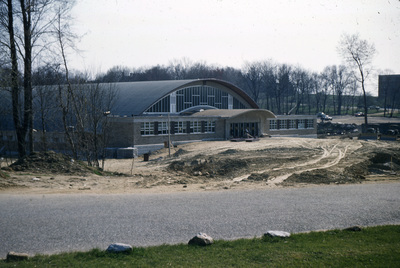 Pictured is the front entrance of Alumni Hall. Canisius is the building on the far right. The corner of Bellarmine (a chimney) can be seen above the roof of the gym in the trees. Donnaruma had not yet been built ‚Äì later it would be constructed over the right wing of the gym. The roads in this photograph have also been reconfigured. The cars in the lot are where the Barone Campus Center would later be constructed. The road on the far left is North Benson. Alumni House would later be built behind the photographer on the hill. The RecPlex would be built on the far left right next to the gym.