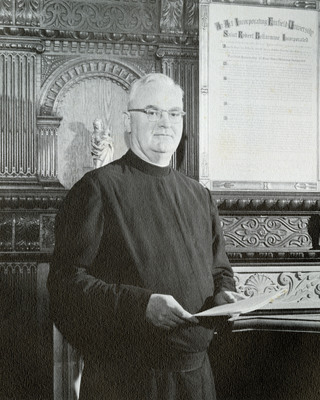 In this photograph, Father Fitzgerald stands in Bellarmine Hall next to a large rendering of the Fairfield University charter. A native of Providence, Rhode Island, Father Fitzgerald had been at the College of the Holy Cross in Worcester, Massachusetts for many years, ten of which he spent as their Dean of Arts and Sciences before coming to Fairfield. Accomplishments during his tenure as President from 1958 to 1964 include the establishment of a Graduate School of Education; the construction of Campion Hall and the Alumni Hall gymnasium; and the establishment of the Development Office. Other events worth noting include the New York Giants using Fairfield for summer training for several years starting in 1960; an impromptu student boycott at dinner of cafeteria food (resolved peacefully) in 1962; Fairfield‚Äôs win over Clemson and two other universities on national television competing in the General Electric College Bowl in 1963; and lastly, the celebration of Shakespeare‚Äôs 400th anniversary with a special festival held during commencement in 1964.

According to Robert William Turcotte in A History of Fairfield University, Father Fitzgerald ‚Äústood well over six feet tall and weighed more than 200 pounds. In photographs taken at the time, his appearance was usually unsmiling and perhaps a bit stern. He was then about fifty-one years old and had been in an important executive position long enough to have well-established views on the operation of educational institutions. He is remembered as a determined man who wanted everything to be very structured and orderly‚Ä¶ He avoided public appearances as much as possible and suffered when obligated to make speeches. Like all of his predecessors, he was both the President of the University and the Rector of the Jesuit community." Image date is approximate.