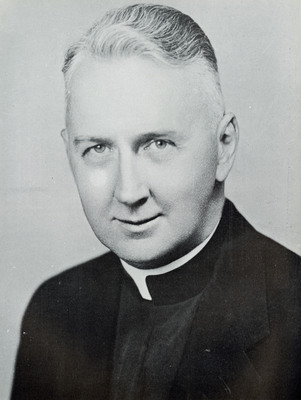 Father Fitzgerald was born in Lawrence, Massachusetts in 1899. He studied at Boston College for a year before entering the Society of Jesus in 1918. After his ordination in June 1931, Father Fitzgerald returned to teach at Boston College until 1937. After serving as Dean at Boston College, he moved into the position of Dean at the College of the Holy Cross in Worcester, Massachusetts, a post he held until 1948. He then became the Assistant Director of the New England regional office of the Jesuit Education Association and shortly thereafter was appointed Province Director of Studies in July 1951. Two months later, in September 1951, Father Fitzgerald was selected as the next president of Fairfield University and Rector for the Jesuit community.

During Father Fitzgerald's tenure from 1951-1958, the first class of Fairfield University graduated in 1951 and the University was admitted to fully accredited membership in the New England Association of Colleges and Secondary Schools. In addition, three buildings were constructed to accommodate the expanding enrollment. Loyola Hall (1955) served as on-campus housing for 200 students, with an infirmary, dining/recreation hall, and a chapel. Gonzaga Hall (1957) provided rooms for an additional 200 students as well as offering an auditorium for drama, debates, and movies. Finally Canisius Hall (1957) was built so that its main floor housed the university library, while above were three floors of classrooms, as well as faculty and administrative offices. Image date is approximate.