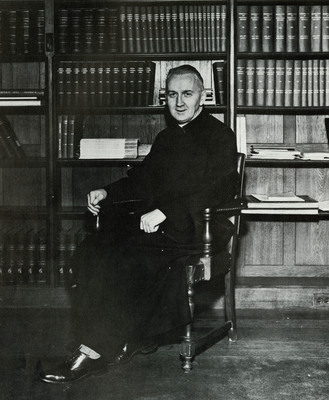 Father Fitzgerald was born in Lawrence, Massachusetts in 1899. He studied at Boston College for a year before entering the Society of Jesus in 1918. He served as Dean of Boston College as then as Dean of the College of the Holy Cross in Worcester, Massachusetts, a post he held until 1948. In 1951, Father Fitzgerald was chosen to be the 3rd President of Fairfield University and Rector for the Jesuit community. During his tenure at Fairfield from 1951-1958, the University was admitted to fully accredited membership in the New England Association of Colleges and Secondary Schools. In addition, three buildings were constructed to accommodate the expanding enrollment: Loyola Hall (1955), Gonzaga Hall (1957), and Canisius Hall (1957).

There have been three full-time Presidents of Fairfield University with the last name Fitzgerald: Rev. Joseph D. Fitzgerald, S.J. (1951-1958); Rev. James E. Fitzgerald, S.J. (1958-1964); and Rev. Thomas R. Fitzgerald, S.J. (1973-1979). (There was also one acting Rector as well, Rev. William Edmund Fitzgerald, S.J., brother of James E. Fitzgerald, who covered for Father Dolan from February to October 1950). Robert William Turcotte in A History of Fairfield University puts it this way: ‚ÄúDuring the 1950s there was a Fitzgerald at the helm in Fairfield in all but one year. Looking back at it, the Fitzgerald decade leaves an impression of calm, of an era when faculty and students both knew what a Jesuit education was, knew what they were doing, knew why, and knew that this was essentially what they wanted. There is a sense of space and of time about the fifties. Men were busy, the work was being done‚Ä¶[and] the pace was, somehow, more measured than it had been before, or would be afterward." Image date is approximate.