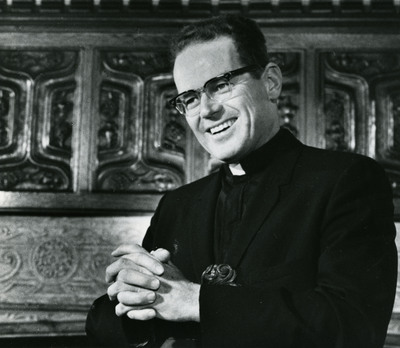 Father McInnes hailed from Boston College, where he had been Associate Dean of the College of Business Administration. He had B.A., B.S., and M.A. degrees from Boston College and a Ph.D from New York University. Father McInnes served as president during much of the sixties and his administration guided the university through many changes. McInnes was the last man to be both President and Rector. He resigned the rectorship and became a much more public figure around the campus than his predecessors had been. During his term the Office of the President relocated from Bellarmine Hall down to Canisius Hall, closer to the students, faculty and classrooms. Through his efforts the by-laws of the charter were amended and the Board of Trustees was created. He employed more laymen in posts of responsibility than ever before, and was also the first President to employ the idea of divided responsibility at the vice presidential level, appointing vice presidents for finance, academic affairs, student services, and others. During his tenure, the Graduate School of Corporate and Political Communication opened in 1970. In 1969, the School of Nursing was established as a school rather than a department, and in 1970 female students, nursing or otherwise, were admitted to Fairfield which was now officially co-ed. The Center for Lifetime Learning offered its first courses and the University graduated its first class of women in 1973.

During Father McInnes' term Fairfield University, along with Annhurst, Albertus Magnus, and Sacred Heart University, was embroiled in the lawsuit of Tilton vs. Richardson, a landmark court case that questioned the legality of religious-based institutions like Fairfield to secure federal funds under the Higher Education Facilities Act of 1963. An appeal was denied the plaintiffs in the Supreme Court in 1971, ensuring Fairfield a significant amount of federal money which contributed to the construction of the new Nyselius Library (1968) and Bannow Science Center (1971). Father McInnes also oversaw the construction of four more residence halls, Regis (1965), Jogues (1968), Kostka (1970) and Claver (1972). The original Barone Campus Center (1966), named in honor of Dr. John A. Barone, was also constructed during this time, as was the Central Utility Facility (1970). Image date is approximate.