His Excellency John J. McEleney, in his official portrait as Bishop and Vicar Apostolic of Jamaica, British West Indies 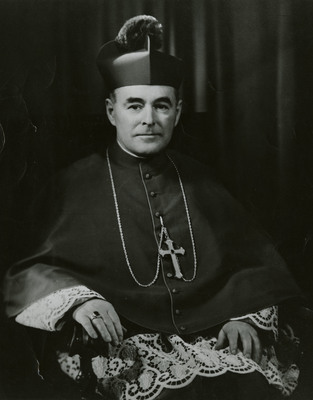 The Rev. John J. McEleney, S.J. was born in Woburn, Massachusetts in 1895. He was educated at Boston College, receiving an A.B. in 1918 and an A.M. in 1924. He entered the Society of Jesus in 1918. From 1924 to 1927, he was a language professor at the Ateneo de Manila in the Philippines. After being ordained in 1930, he served as assistant master of novices at Shadowbrook, in Lenox, Massachusetts from 1931 until 1934 and then returned to that post after a year studying ascetical theology in North Wales in the United Kingdom. In 1937, he received a Ph.D. from the Gregorian University in Rome, Italy. He became the first rector of the newly-opened Fairfield College and Preparatory School and the first president of Fairfield University in 1942. He stayed at Fairfield until 1944, when he was appointed the Provincial of the New England Jesuit Province. Then in 1950 Pope Pius XII appointed him Bishop and Vicar Apostolic of Jamaica, British West Indies. In 1956, the Jamaica mission was elevated to diocese and Bishop McEleney became the first bishop, and then the first archbishop, when the archdiocese was created on August 15, 1956. He continued to serve in that position until his retirement in 1970.

Robert William Turcotte describes in A History of Fairfield University how the newly appointed Father McEleney began his Rector/Presidency at Fairfield in 1942: ‚ÄúHe lived alone in the huge, empty, Jennings house for several weeks, and, as word of that spread, many new friends appeared to help get things going‚Ä¶. The first brochures about the school [noted that] tuition was set at one hundred and fifty dollars‚Ä¶ the pamphlets outlined the origin of the School and explained that the Jesuit education objective was to help students to prepare to live in the world with a focal regard for spiritual truth‚Ä¶ Father McEleney was a very warm and outgoing man, one who was readily accepted and liked wherever he went. He easily established a rapport with diocesan priests, faculty, parents and others. He caught people‚Äôs interest and got them involved on behalf of Fairfield with surprising speed." Image date is approximate.