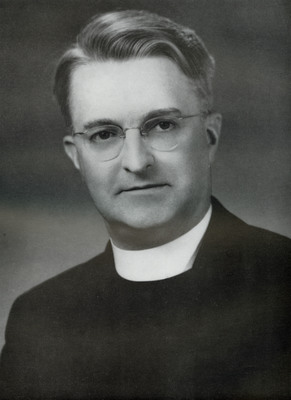 A native of Providence, Rhode Island, Father Fitzgerald assumed his duties as Dean of Fairfield in September 1949. He became acting Rector when Fairfield University President Rev. James H. Dolan was appointed Vice‚ÄìProvincial of the Jesuit New England Province in February 1950. Father Fitzgerald served as acting Rector/President until October 1950, when he himself was appointed Provincial of the New England Province, a post he held until 1956. Father Fitzgerald's entire family seemed destined for the field of education. His younger brother, Rev. James E. Fitzgerald, S.J. was Dean of the College of the Holy Cross while William was at Fairfield. In 1958, James became the 4th President of Fairfield University and served until 1964. Another Brother, Rev. Leo F. Fitzgerald, S.J., was a professor of French at Holy Cross, and there were two Fitzgerald sisters who were also engaged in the educational field: Sister Norberta of the Order of the Sisters of Mercy was a professor of education in St. Joseph‚Äôs College in Portland, Maine, and Miss Kathleen Fitzgerald was a teacher in Oliver Perry Junior High School in Providence, Rhode Island.

Graduating from LaSalle Academy in Providence in 1918, Father Fitzgerald assumed a teaching position at the Academy. After teaching at the Academy one year, he entered the Jesuit Novitiate at Yonkers, New York. He made his literary studies at St. Andrew-on-Hudson and did his graduate work at Weston College in Massachusetts. Father Fitzgerald began his regency in 1926 as Instructor of Classics at Boston College. In 1929, he began his theological studies in Lyons, France, at the Pontifical University of the Immaculate Conception. Receiving his Licentiate in Sacred Theology in 1933, Father spent four years doing research in comparative religions and ancient philosophy at the Universities of Paris and Berlin. In 1937, Father Fitzgerald returned to the United States and studied ascetical theology at St. Roberts Hall, Pomfret, Connecticut. He was then assigned to the Boston College faculty, where from 1939 to 1942 he was chairman of the Department of Classical Languages. With the reorganization of Cheverus High School in Portland, Maine, Father Fitzgerald was appointed it first Rector. While in Maine, Father lectured widely on social subjects and education. In 1947, Father Fitzgerald returned to Europe to participate in an International Congress on Education and the Christian Apostolate, conducted at Versailles, France. In 1949, he was appointed Dean at Fairfield University. Image date is approximate.