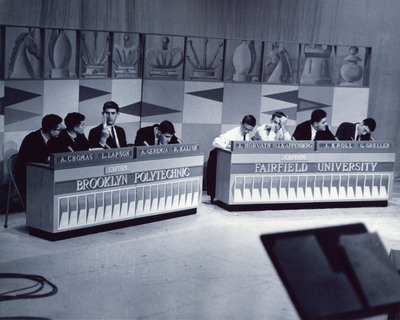 In 1963, a team of Fairfield University students won three consecutive games on the nationally-televised General Electric College Bowl. Billed as a ‚ÄúGame of Wits‚Äù this famous quiz show pitted teams of college students against each other in a test of their knowledge of history, science, literature, sports and trivia. Originally a radio show, College Bowl had grown into a popular live television show hosted by master of ceremonies Robert Earle and broadcast on NBC Sundays from 5:30 ‚Äì 6:00 PM. The winning Fairfield team consisted of the following students: John Horvath, John Kappenberg, Joseph Kroll and George Greller; their coach was Rev. Donald Lynch, S.J. This put Fairfield on the map in the eyes of many and was a morale boost for the entire school. Fairfield ultimately lost its fourth game to Brooklyn Polytechnic.