Noah at the Window 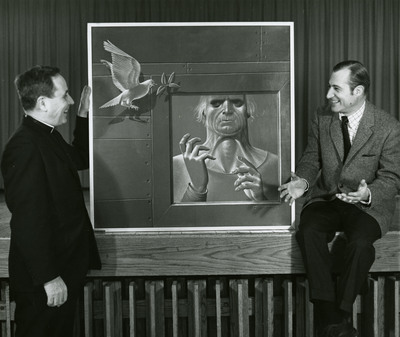 Noah at the Window was a portrait in oils done by Westport artist Leonard Everett Fisher in 1964. It shows Noah at the window of the ark receiving a dove with an olive branch in his beak. The man on the left is Rev. George Mahan, S.J., and the artist Leonard Everett Fisher is on the right. This painting hung in the reference section of Nyselius Library for many years. After water damaged the painting, a repaired version was created in acrylic and remounted in 1978. It now resides in storage.

Born in Dorchester, Massachusetts, Rev. George S. Mahan, S.J. attended parochial school and graduated in 1928 from Boston College High School. In 1932, Father Mahan graduated from the Society of Jesus in Lenox, and came to Weston College for three years of philosophical studies. Father Mahan traveled to Palestine for two years of archaeological study and field work in Jerusalem where he was a member of the Jesuit archaeological team. In 1940, he was ordained at Weston College and performed a year of pastoral service in Pomfret, Connecticut. He pursued graduate studies at the University of Chicago in Near Eastern Archaeology and Languages. After teaching at Boston College High School for one year in 1948, Father Mahan came to Fairfield and served as principal of the Fairfield Preparatory School. He was appointed Assistant Dean of Freshman at Fairfield University in 1951. For over 25 years, Father Mahan served as Assistant Dean of Freshmen and Director of Admission through 1961, and later as Executive Assistant to three Fairfield University Presidents: Rev. James E. Fitzgerald, S.J.; Rev. William C. McInnes, S.J.; and Rev. Thomas R. Fitzgerald, S.J. In 1980, he transferred to Bishop Connolly High School in Fall River where he worked for seven years as assistant to the president and director of development. He then returned to Boston where he served as assistant director of the Jesuit Seminary and Mission Bureau and moderator of the Campion Club. Father Mahan passed away in 2004. Leonard Everett Fisher, the well-known author and illustrator, was born in Bronx, New York, in 1924. After serving in World War II as a cartographer, he attended Yale University's School of Art where he received his Bachelors and Masters degrees in Fine Arts. Since 1954 he has illustrated some 260 books for young readers, 90 of which he wrote, and has also designed United States postage stamps. His artwork is in collections nationwide, including the Library of Congress and the Smithsonian Institution in Washington, D.C. Although he is well known and admired for his scratchboard drawings and his acrylic paintings, he also uses other media. A longtime resident of Westport, Connecticut, Fisher is a Pulitzer scholar and the recipient of numerous art awards. Image date is approximate.