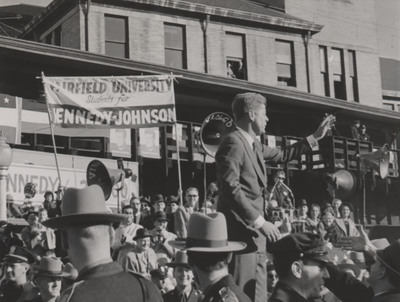 In November 1960, Senator Kennedy flew into Bridgeport Municipal airport in Stratford and commenced a whistle-stop tour by train of Bridgeport, Waterbury, and New Haven. We know he spoke to a crowd of well-wishers on November 6th at Railroad Station Plaza in Bridgeport (for the text of this address, consult the John F. Kennedy Library and Museum online). The recently formed Young Democratic Club at Fairfield University was active in the campaign, helping to man the Kennedy information booth at the State Convention held in New London the previous May. Our best information suggests that this photograph was taken with the students from Fairfield University in attendance at the Bridgeport Railroad Station in 1960.

John F. Kennedy was just 43 years old when he ran for President on the Democratic ticket in 1960, choosing Texas senator Lyndon B. Johnson as his running mate. A turning point in Kennedy's campaign was the favorable impression he made in a series of four televised debates with his Republican opponent Vice President Richard M. Nixon. An estimated seventy million Americans, about 2/3 of the electorate, watched the first debate on September 26th, 1960. John Kennedy was elected president, in one of the closest elections in United States history: his popular vote margin over Nixon was paper-thin, although his electoral vote victory was a more comfortable 310 to 290. Kennedy has the distinction of being the youngest elected president, the only Catholic and the first born in the twentieth century. Image date is approximate.