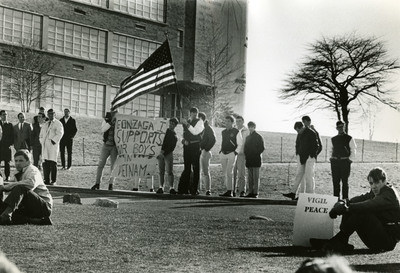 On the morning of October 19th, 1967, a peace rally was held at the Campus Center in response to the presence of Air Force ROTC officers offering information about their programs to students. Later that afternoon, a second but unrelated peace vigil was held on the lawn of Gonzaga Hall. During a time when anti-war demonstrations were common on college campuses, Fairfield University offers us an interesting glimpse into the inner conflict of a country. At Fairfield, there were as many demonstrations of support for our U.S. troops in Vietnam as there were anti-war protests for peace. This photograph was taken on the lawn of Gonzaga Hall, and features members of both the peace vigil (seated) as well counter-demonstrators who hold a sign that reads: "Gonzaga I supports our boys in Vietnam."

According to The Stag from October 25, 1967, the peace vigil was held "to urge the Johnson Administration to take the first steps in ending the war and 'to express deep sorrow and protest at Americans killing and being killed in Vietnam.' 'The vigil unified those who believe the war is worth questioning,' stated William O'Brien, one of the organizers... As the group observed an hour's silence in a circle, about an equal number of counter-demonstrators, urging support for U.S. servicemen in Vietnam, held signs criticizing the anti-war movement, while shouting an occasional taunt. The 'National Anthem' and other patriotic music were part of the counter demonstration."