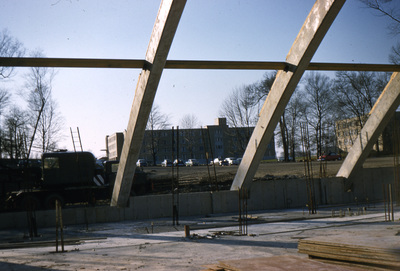 Through the concrete arches of Alumni Hall, cars and Gonzaga Hall can be seen in the background. Loyola Hall is visible in the background on the far right. There used to be a road that went from in front of Alumni Hall heading toward Loyola, then south toward Gonzaga and up the hill to meet the road between the Chapel and Bellarmine. There is no road anymore ‚Äì just sidewalk where the cars are in the photograph. This is all sidewalks and walking paths now. On the far left, Canisius would be just beyond the view of the photograph.