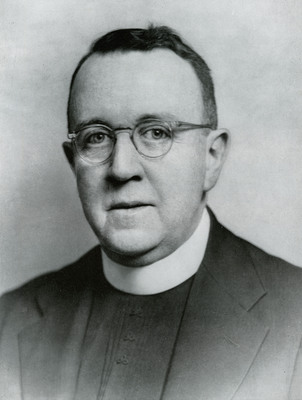 Rev. James H. Dolan, S.J., one of the founders of Fairfield University, was born on June 4, 1885 in Roxbury, Massachusetts and passed away at the Campion Center in Massachusetts in 1977. As described by Robert William Turcotte in A History of Fairfield University, ‚ÄúDolan was a Bostonian who had entered the Society of Jesus in 1905. He was ordained to the priesthood in June of 1920 and then taught philosophy and psychology at the College of the Holy Cross, in Worcester, Massachusetts. From 1925 to 1932, he served as President of Boston College, where he created the Law School and was responsible for construction of several important buildings. When his term at Boston College ended, he was appointed assistant to the Provincial for New England and also prefect-general of studies for the province. He held these posts until May of 1937, when he was named Provincial‚Ä¶ ‚Äú[he] was described as deeply religious, hardworking, earnest, exacting, hard but fair, tight fisted with money and a wonderful character.‚Äù Father Dolan was appointed to the Rector/Presidency of Fairfield University in 1944. Father Dolan helped to found and guide the university in its early days, culminating in its first commencement in 1951.

During Father Dolans‚Äôs tenure as President, Fairfield University was chartered by the State of Connecticut to grant degrees in 1945; the university purchased the estate of Edward B. Morehouse, filling out the southeastern perimeter of the campus in 1946; and Berchmans Hall and Xavier Hall were both completed in 1947 to augment the existing buildings. Also in 1947, the first class of 303 male students was admitted to the College of Arts and Sciences of Fairfield University. On June 12th, 1951, Father Dolan presided over the first commencement, which included as guests the Rev. Henry J. O‚ÄôBrien, Bishop of Hartford; Bishop John J. McEleney (former first President of Fairfield University) and John Davis Lodge, Governor of Connecticut. Image date is approximate.