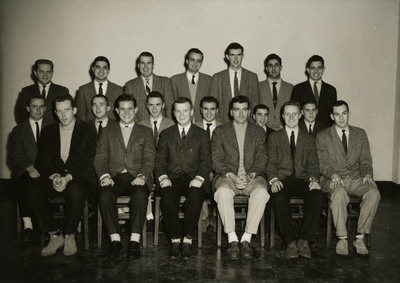 From the Manor 1958: "In the fall of 1947, with the initial opening of the University, came the formation of the Society of Birdwatchers... Early meetings were held in the inauspicious but warm surroundings of the House of Flanagan, noted bird sanctuary on Reef Island in Fairfield. As the University grew, so did the Society... Except for 1955-1956, when the Birdwatchers became almost extinct due to a curtailment of activity and clipping of certain wings, the Society has increased its functions and established a new sanctuary, the Beachside Nest, where at almost anytime of day or might members may be seen contemplating the Society's symbol, Three Feathers, or perhaps communing with spirits as they sit with their mascot, the Old Crow. Still, the favorite activity of all Birdwatchers may be easily observed as one oft-times sees them reclining, standing, in all positions, with glasses raised, watching the swallows. It is with much solemnity and sadness that the Senior members, passing into extinction and attaining the rank of Dodo, will utter the Society motto for the last time: 'We're for the birds.'"

This photograph was donated to the Archives and Special Collections by Charles Conway, Class of 1958. Image date is approximate.