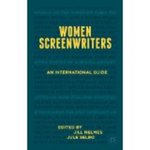 Michelle Leigh Farrell is a contributing author, "Cuban Women Filmmakers from 1959 until 2013".

Book description - Women Screenwriters is a study of more than 300 female writers from 60 nations, from the first film scenarios produced in 1986 to the present day. Each entry gives an overview of the history of women screenwriters in that country, as well as individual entries on its most influential. The scope and range of the book, then, is far beyond any existing coverage of the subject. The volume is divided into six sections by continent: Africa, Asia, Australasia, Europe, North America and South America, with entries from the more frequently written about nations such as the United States, United Kingdom, France and Australia, to nations such as Malta, Romania, South Africa and Switzerland, where a rich but rarely discussed tradition of female screenwriting has been unearthed.