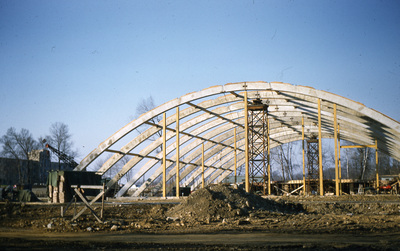 This photograph shows the curved bare concrete arches that make up the ‚Äúskeleton‚Äù of Alumni Hall. There is a crane on the left, and Loyola Hall is also visible on the far left in the background. Where one can see a pile of dirt in photograph there is a large parking lot in front of Alumni Hall now. Behind the car toward the left of photograph would be where the Kelley Center is now. Behind the green trailer in the middle of the photograph there is now an athletic field.